The chrome extension to help you set limits that work for you and give you insights into your watching habits.

This stuff is addictive. We need some extra help, just like this extension.

Get the extension for free

People who save time with watchlimits:

"Time flies when watching YouTube (the algo is so good, it doesn't help) Watchlimits helped realize when I'm overwatching, and get back to what I want to do"

Marc Lou
"I really like that you can send a different limit per each weekday, so for example I can set very low limits on weekdays, but chill on weekends..."

Kazi Rabbany
" By showing me how much time I spend on YouTube, watchlimits helps me avoid countless wasted hours each week. Would recommend!" 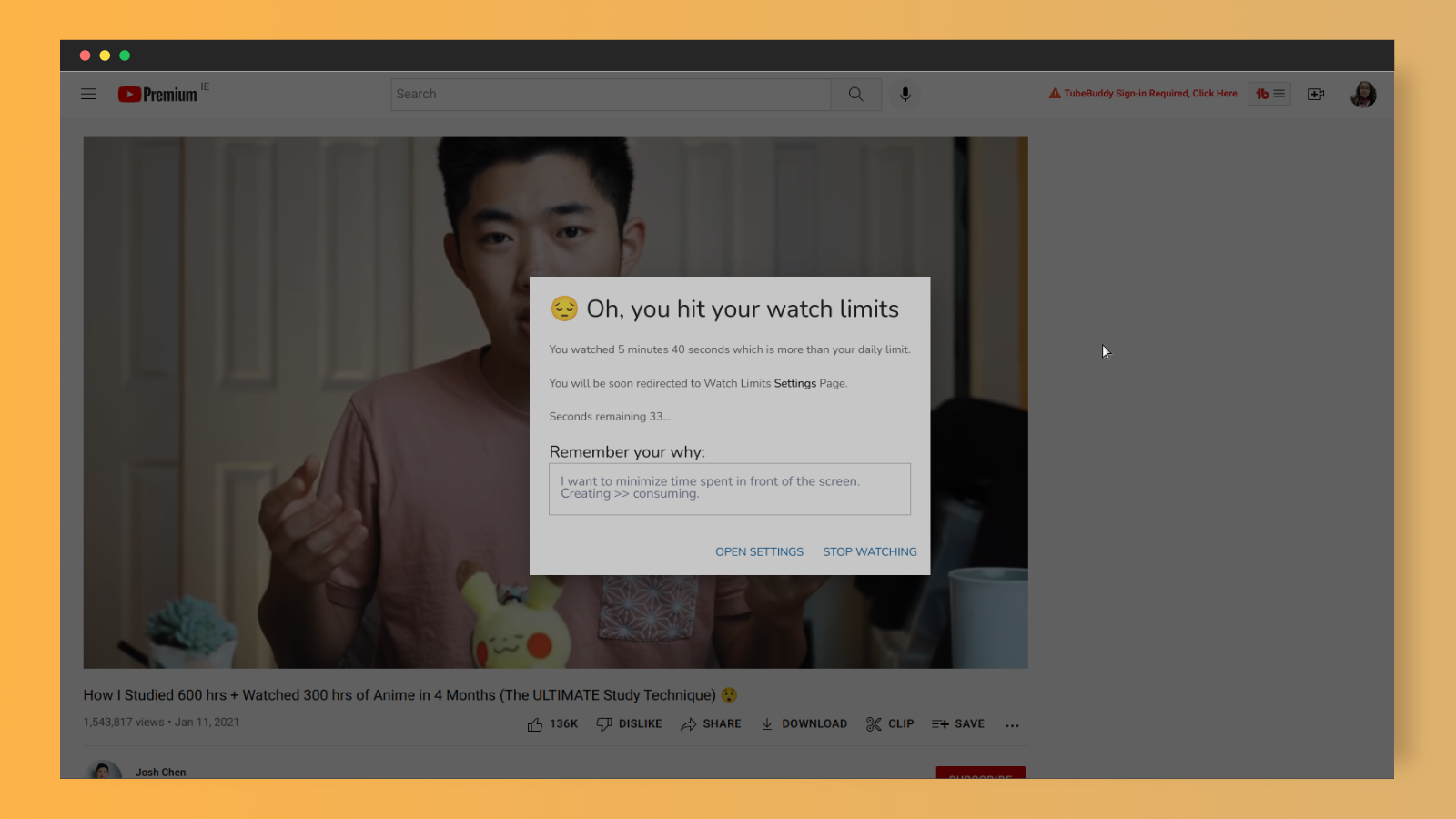 Make binging on streaming a thing of the past

How often you are going to watch "just one video", but then it suddenly has been a couple of hours?

Watchlimits will help you set limit time on YouTube, Netflix, Disney+ and other platforms so you can start watching without worrying that it will end up much more than you initially planned.

Say goodbye to missing sleep due to watching an entire season instead of just one episode!

Track and understand your watching patterns

Do you know how much time you spend watching on various platforms? It might seem like not much, but time adds up. Majority of people easily spend 10h+ a week and some watch more than 20h per week.

Don't guess, find out with watchlimits. After all it's hard to improve things you don't measure.

Get watchlimits and start tracking your stats 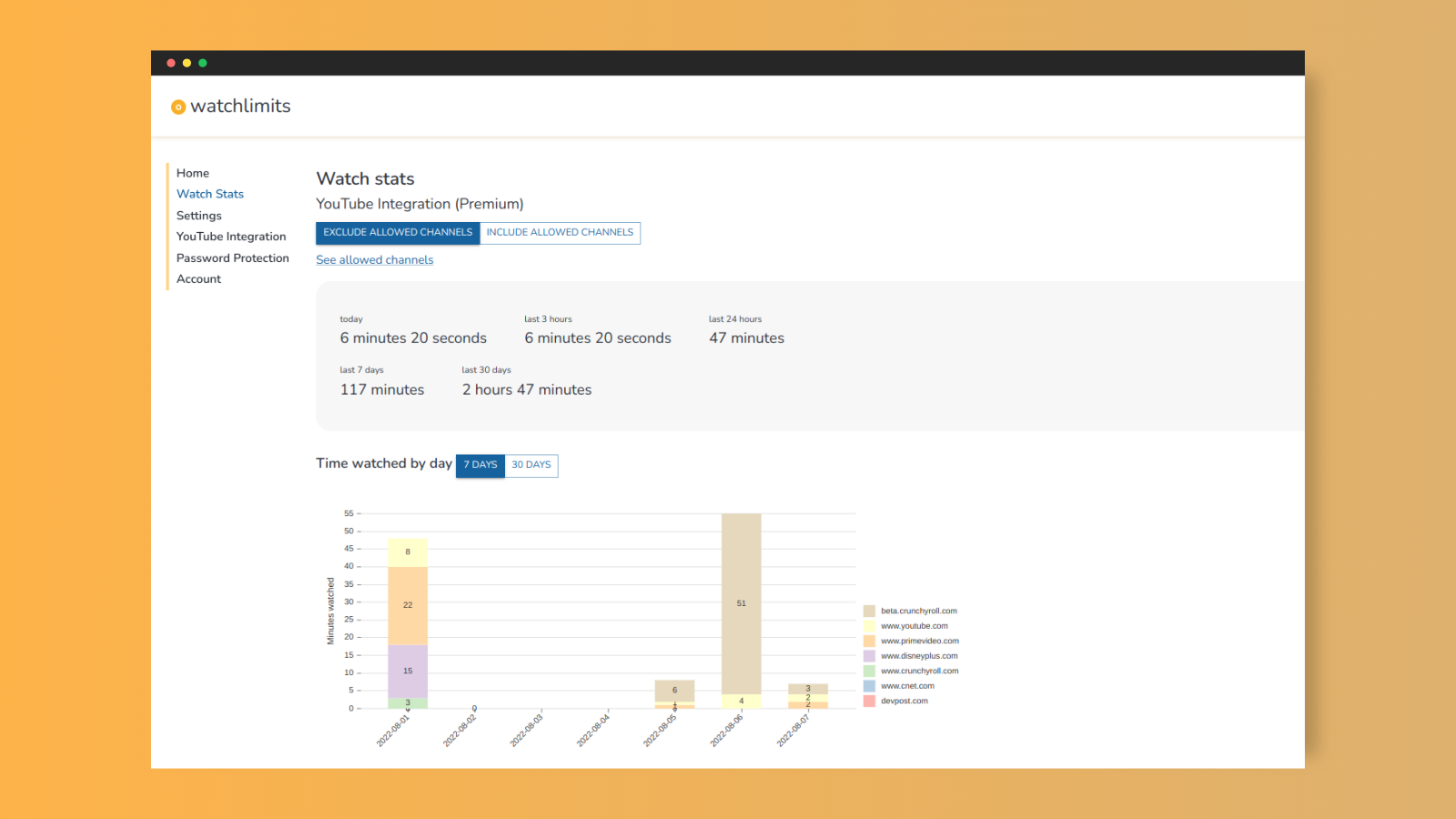 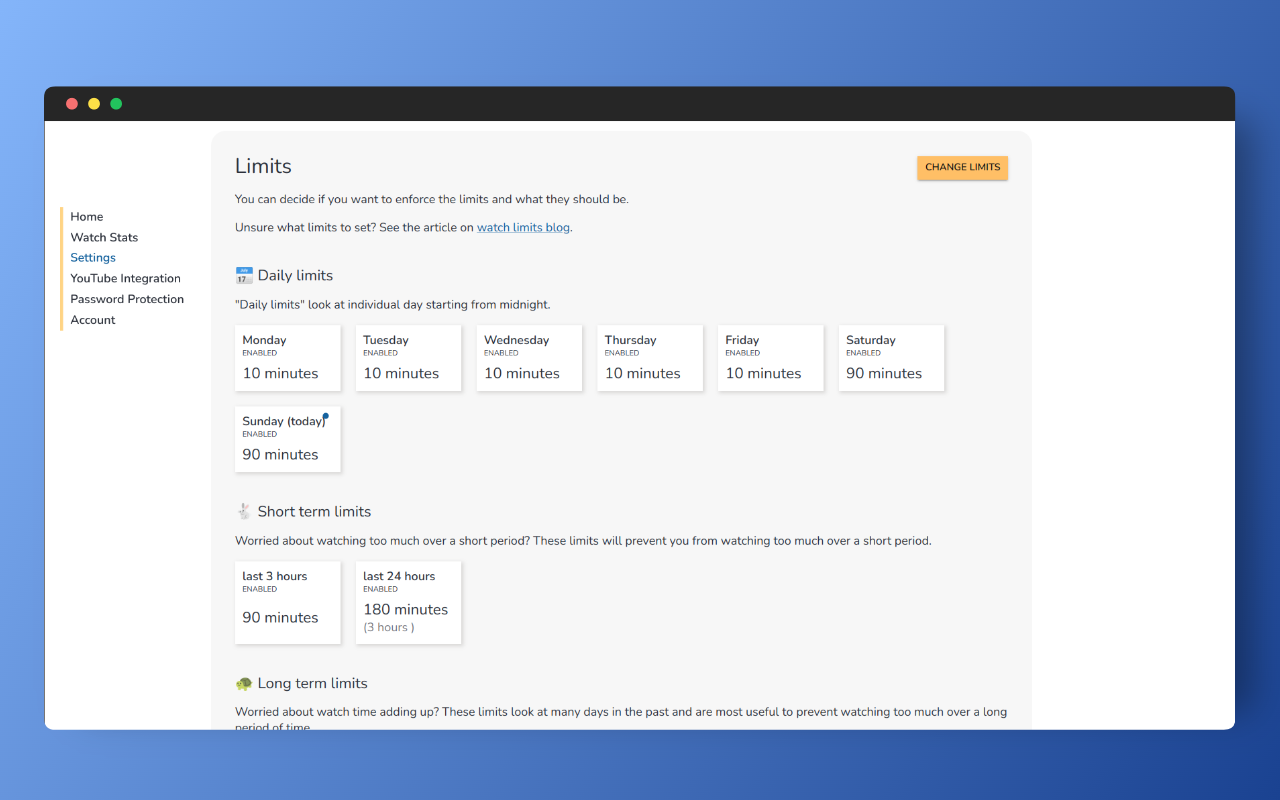 Do you feel like there is never enough time in a week?

You might be surprised how much time you can get back by stopping mindless watching. Watchlimits can help you budget your watching time with long term limits.

You can set up different daily limits for each weekdays for limits to fit your life. You can have monthly or weekly limits too!

Stay accountable to yourself easily

Deciding your limits is one thing, sticking to them is a different matter.

With watchlimits you can set up your custom why that will motivate you to stick to your commitment. You can enable password protection, so any settings changes will require you to input a password. Or you can go hard core and not enable any settings changes once limits are exceeded. It's up to you!

Check out the guide of how to avoid disabling or uninstalling. 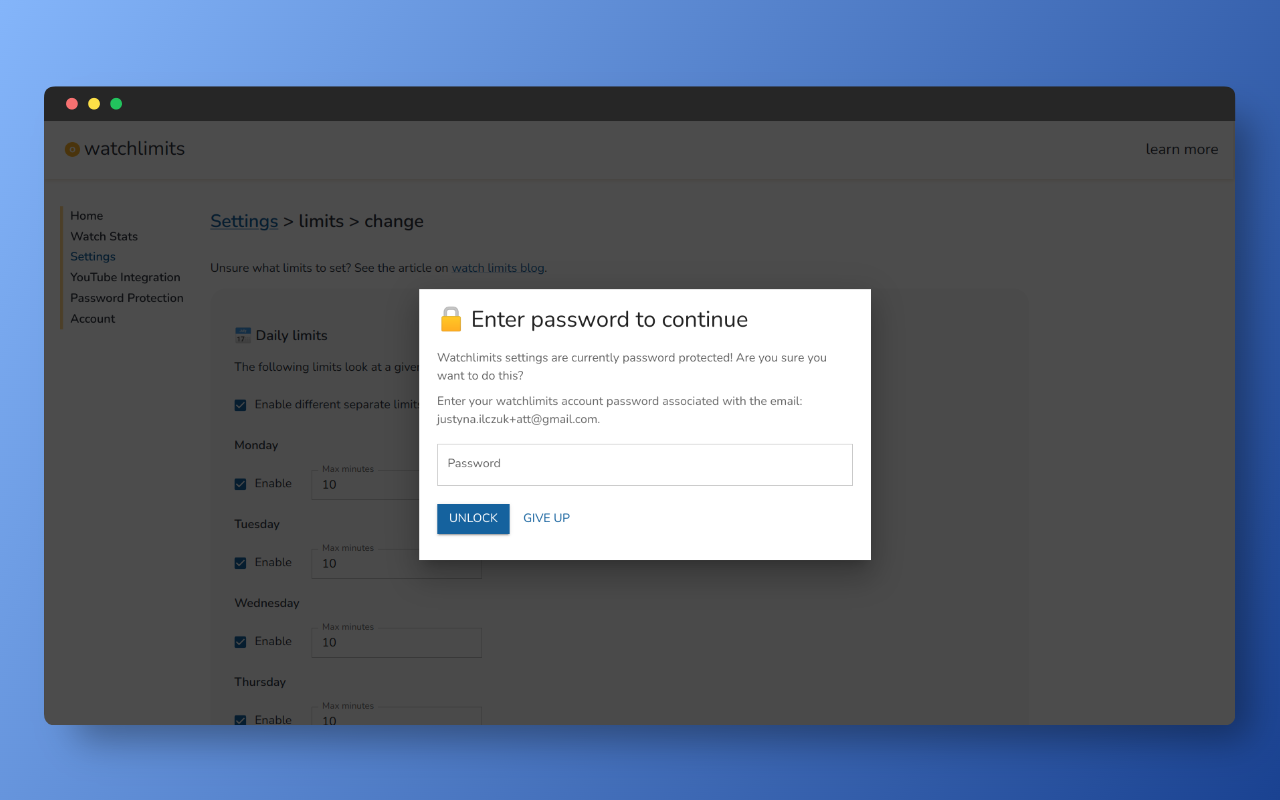 Watchlimits goal is not to stop you from having fun, it's to stop you when it's no longer worth it

Get the extension for free or learn more

Basic version of Watchlimits is available for free and you can get it from chrome web store directly or through the installation page.

If you are serious about cutting on your watching, but the basic version is not enough for you, there is a Premium version with more features that you can learn about here.

Video content being addictive is a big problem and we plan to always have a great functional version of the extension available for free.

Is watchlimits extension running on all sites?

No. Watchlimits is only enabled on a small number of sites that are related to video content, so there is no need for it to be on all the sites you visit.

What if I want to listen to music on YouTube, does it count against the limits?

No, video has to be both visible and playing to count. So you can listen to music as much as you want.

Can I allow some channels, e.g. when I'm watching lectures?

Yes! You can configure up to 5 channels that will be allowed and won't count against the limits.

I don't have a binging problem, does it still make sense to me to have watchlimits?

Yes! You will get useful stats and be able to set long term limits that will prevent from watching adding up.

Can I use it with other browsers?

Watchlimits is made for Chrome, but it works with other Chromium based browses like Edge or Brave.