Watchlimits has a powerful limit functionality. The number of possible limits might be a bit overwhelming though.

what limits to choose, with what values?

I don’t want to binge#

Are you worried about watching way too much in one sitting? Or over one day?

The simplest solution for that would be to use the daily limit, but you can also combine it with the 3 hour window or the 24 hour window limits for more flexibility. How does it work?

Imagine binging Bob, Bob likes to enjoy netflix after work, but sometimes he goes too far and watches 3 or more episodes at once and goes to bed way too late.

How can Bob solve this issue with watchlimits? The simplest solution would be to set up a daily limit.

Bob could set it to 90 minutes and just adhere to that.

However if Bob also watches a bunch of youtube for fun during the day the 90 minutes might not be enough. Bob could set a longer day limit e.g. 180 minutes and a 3h one to 90 minutes (or less!). Then Bob could watch netflix or other video content for longer during the day, but never binge excessively.

I don’t want to watch too much on specific days#

For most people their weekdays look very different from their weekends, so it makes sense to have different limits on different days or not to have limits at all on certain days!

Imagine adventurous Anna, she has a pretty busy work schedule and doesn’t mind watching quite a bit unwinding after work, but for her weekends she wants to be out and about not glued to her screen. She has generous limits for most weekdays, but for weekends, she sets her limits to 10 minutes for each day. Wow! She won’t waste time at home!

On the other hand, homebody Homer doesn’t mind watching a lot on weekends, he only sets limits for weekdays and on weekends he is free to enjoy his favorite shows as much as he wants. Watch limits extension provides this type of flexibility - no problem! 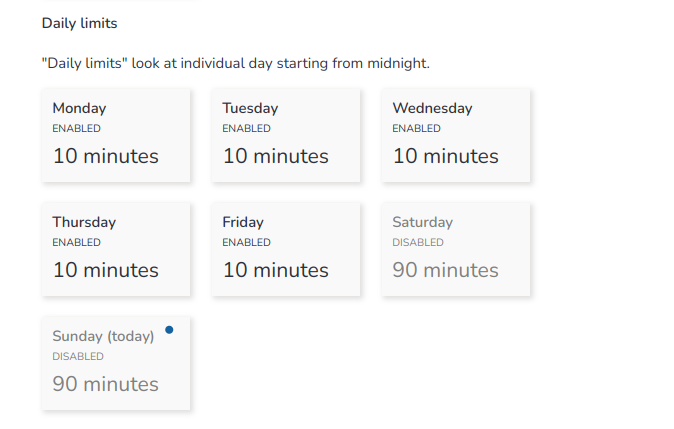 Obviously, if you are ok with the same limit every day, that is cool too!

I’m ok watching a lot sometimes, but I don’t want it to add up to a lot#

It’s possible that you have pretty good self control and you don’t really need daily limits. Or maybe you are ok with an occasional binge if the series is really good. But are you worried that over a longer period of time you are wasting away your precious time?

Time watching adds up. Just look at my own stats: 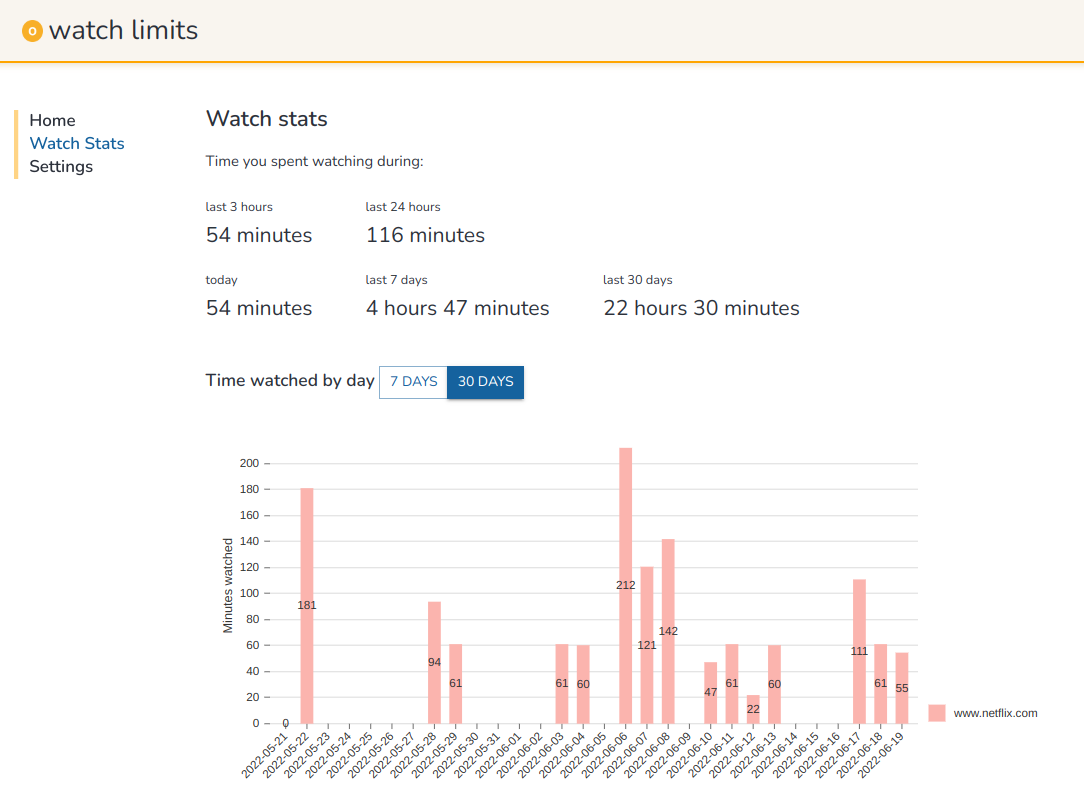 I’ve spent more than 20 hours watching netflix alone! (There were some good series there to my defense!).

She can enable and set long term limits in watch limits, the 7 day limit and 30 day limit. Other limits can be disabled or have pretty generous values.

Danger of setting limits that are too restrictive#

If you set limits that are lower than what you have watched already for a given period, you might get limited straight away!

If you also have a setting enabled that blocks limit changes after you exceed any of your limits, you won’t be able to change the limits. That might be something you want or not… so careful with that!

Overall you should avoid tweaking your limits too often especially if you just exceeded them. In the end if you keep extending them every time you run out, then would it serve its purpose?

Aim at something you can stick to. You can always tighten them up later.